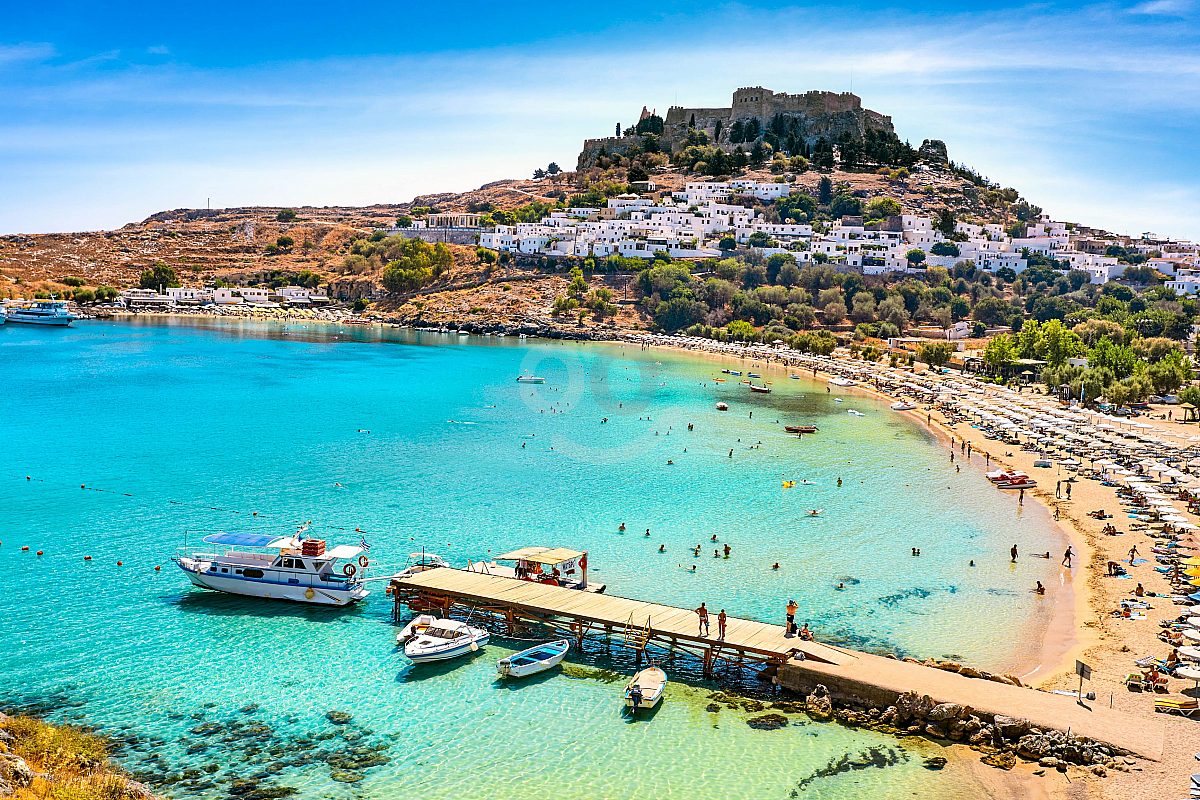 Hire a car in Rhodes and make a day trip to Lindos privately in comfort and style.
The best time to be there Is the earlier possible in the morning, so it will not be too hot and not too busy, because everybody go to Lindos, most of the people on the line buses or with the organized excursions and all of them are there about the same time from 09:30 to 10:30, so it gets very busy, so maybe you will have to wait in line to enter the Acropolis wasting lots of time.

The Village of Lindos is one of the places you really need to visit, is one of the most attractive and beautiful villages of Rhodes.
It lies on the east coast of the island about 40 km south of the town of Rhodes and its fine beaches make it a popular tourist and holiday destination.
Lindos is known for its clifftop acropolis that is the most important and beautiful archeological site.

The ancient town of Lindos, 45 km to the south of Rhodes Town
Lindos is one of the most ancient castles in the world and one of the most significant archaeological sites of Greece, for most visitors the most impressive archaeological site on Rhodes. The Lindos Acropolis rising dominantly on a steep cliff at 116 m height overlooking the sea, and the traditional village of Lindos, that makes the Acropolis of Lindos the point with the best view on the island of Rhodes.
The gateways of the Sanctuary consists of a staircase and five-door openings. You will have the chance to see the relief of an ancient warship, called trireme, at the foot of the staircase. Apart from these, there is also a Roman temple dedicated to the emperor Diocletian and a Hellenistic wall that surrounds the Acropolis.
All these ancient sites are protected by a Medieval Castle, built in the early 14th century by the Knights of St John. Two towers of the castle are well-preserved till today. Outside the castle, on the southwest side of the will, there used to be an ancient theater. Today the only remains of it are some rows of seats, part of the auditorium. It is believed that the theater could host 1,800 spectators.
Opening hours: Winter season 08: 30-14: 40, Monday closed. Summer season 08: 00-19: 40 & Monday 08: 00-14: 40.

Lindos is the most beautiful village on the island of Rhodes.
That’s why is very busy. To park your car for free and with no problems, just follow the indication of our navigation system and park your car at the free of charge parking place just above the beautiful St. Paul’s bay.
It’s the last parking place so there will be always free spot. The walk to Lindos is only a few minutes, and you will enjoy the amazing view of the Acropolis of Lindos on the way there.